Braving the elements on the coal mines heritage trail

In their excellent book, ‘The Coal mines of Buxton’ Alan Roberts and John Leach make the claim that the mining country around Buxton had some of the harshest and toughest working conditions in the country. Judging by the awful weather on Sunday 26th July, it was easy to believe it. It was a tribute to the dedication and hardiness of the 31 Buxton Civic Association members and their walking guides, Lyn Noble and Alan Roberts, that the walk took place at all.

The guided walk gave members and friends a fascinating glimpse of the significant coal mining industry that went on, on and under the moors above Buxton. Without expert guidance it would have been hard to see and to understand the extent of the workings in the landscape, as now only the ghost of traces of what went on in the hillls remain.


Starting at Cistern’s Clough, and making its way across the bleak Moorland and hill country above Buxton, the trail finishes at the Dukes Level, Ochre brook. The trail traces the origins of coal mining from the 16th century, right up to the closure of the last commercial mine in 1919. Now there is very little trace of the workings left, but with some expert guidance and a little imagination several features were revealed and it became clear that the landscape was littered with disused workings, mine shafts (now sealed), and traces of the raw material itself, albeit of a very poor quality.

The licenses for the mining were granted by the Chatsworth Estate. The coal that was extracted was mainly used for lime burning, and much of it would have found its way to Grin low. Improvements in transport links, such as the development of the canals and railways, and the increasing difficulty of extracting the coal from the workings due to flooding, meant that it became cheaper to use better quality coal from deeper mines elsewhere. The coal mines of Buxton ceased and fell into disrepair.

The plan is to repeat the walk again in the near future, and this will be the first of several heritage walks that Buxton Civic Association members are developing as a result of their ‘places and spaces’ project. If you are interested in finding out more about this and other projects that BCA are involved with, please have a look at the website on www.buxtoncivicassociation.org.uk or email us at communications@buxtoincivicassociation.org.uk

Some Photographs from the Archives 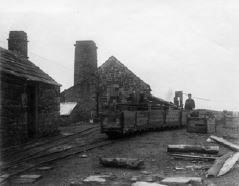 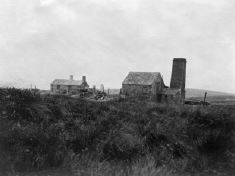 Cistern's Clough engine house with the fire house in the background 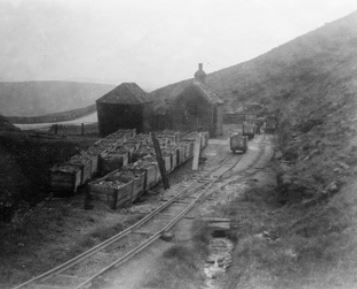 The photographs above are reproduced with kind permission from Frank Emerson.

The guided walk is based upon source material researched and provided by Alan Roberts and john Barratt.

Copies of Maps and Geological Section