Using the Past to Look Forward

As the 50th anniversary of the Association is fast approaching it’s time to get our archives in order Lindsay Rolland has a Masters in librarianship and has kindly volunteered to attempt to make our archives more ‘user friendly’.
Lindsay says, “I’m trying to get a catalogue of everything in the database that can be searched by place, time or event so people can find the source they’re looking for. And I’m trying to make it as accessible as possible so you don’t need me to work it for you.”

Why Did We Save Grin Low Tower aka Solomon’s Temple? 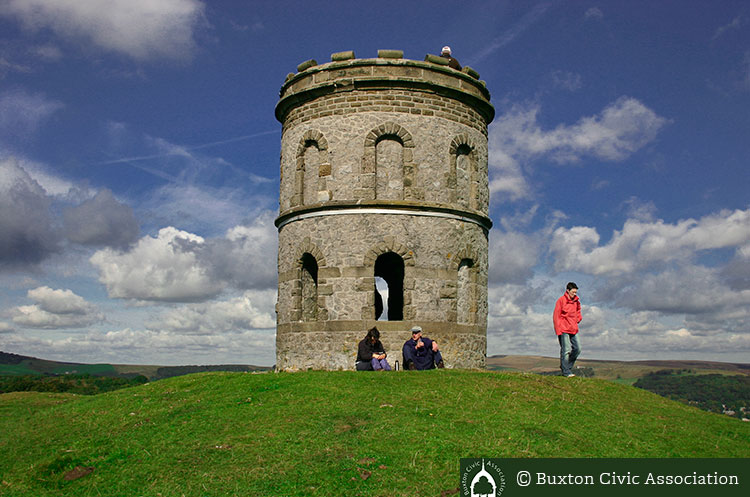 Buxton is fortunate in its inheritance of historic buildings set in beautiful countryside. The price of keeping them is constant vigilance and our Civic association is one of Buxton’s ‘watchdogs’. The aims of BCA are exemplified in its relationship with one of Buxton’s high spots – Solomon’s Temple.

Civics and Celebrity
The Buxton Advertiser of January 1987 (below right) showed a large picture of the fenced off tower. The tower was in danger of collapse and £20,000 was needed for repairs. The Countryside Commission and County Council set aside money but there was a shortfall of £7,500. The Civic Association had to act quickly! Repair work began in late July 1987. Children from four local schools were photographed as they raised £1,700 towards the appeal. Local pubs raised money ‘over the bar’. Buxton born star Tim BrookeTaylor returned to help raise cash to stop Grin Tower from being demolished. ‘One of his first and most exciting memories is of walking through Grin Wood,climbing the spiral staircase of Solomon’s Temple and taking in the view stretching from Mam Tor to Axe Edge.’

It has long been recognised that locals and tourists are attracted by a focal point to walk to and connect with. There has been a Temple or Tower on Grin Low Hill for 150 years. It is recorded in William Adam’s book Gem of the Peak in 1838. He said ‘it forms a conspicuous and interesting object from Buxton’. It was built to ‘afford occupation to the unemployed of Buxton’. Croston’s guide of 1865 stated it was ‘built to resemble at a distance a ruined tower.’ But by the end of the century it ‘had succumbed to wind and became a mere heap of stones.’ (W.M.Turner) Amongst these remains an ancient Bronze Age barrow was discovered displayed at Poole’s Cavern and in Buxton Museum.

Planners’ Dreams
In 1894 a committee had been formed with the intention of building a replacement. Aware of its attraction for tourists the new tower was designed with a powerful telescope, stained glass windows, doors and a flagpole a sum of £150 was required. When the Foundation stone was laid on 4th June 1896 flags were flying and upon a pole was affixed a coloured sketch of the proposed tower. In the rear stood Fairfield Band whose Colonel Sidebottom asserted that, ‘it would not only be a place of shelter but where they could partake of “… the cup that cheers but not inebriates” and ‘provide yet another source of attraction and so benefit the resident of Buxton.’

Vandalism took away the stained glass windows, oak door and flag pole and by 1985 the temple was in a dangerous state and it had to be closed to the public and a fence placed around. During the 1970's it became officially owned by Derbyshire County Council and the neighbouring woodland had been donated to Buxton and District Civic Association in the 1960s. By 1987 it was once again time for an appeal and the intervention of local Buxtonians united by the Civic Association saved Solomon’s Temple. The spirit engendered by the need to preserve what is important to Buxton as a destination for tourists and a beautiful place to live is encapsulated in the renewing of this treasured icon. Let us hope that the current members of the BCA are aware of this important gift that has been placed in their
hands to watch over.

Working with the Community
Today we continue to raise awareness of planning issues that will affect the future of our unique town. We are currently being invited to take part in consultation to help to shape the future of Buxton. We should all take up the invitation and give our views individually as well as through BCA.

Why save the ‘Serps’?
It would be so good if BCA could encourage High Peak Borough Council to develop their logo from ‘working for the community’ to ‘working with the community’.

Proposals to build three houses in the Serpentine, with resulting detriment to a valued community facility, are a case in point. It has to be assumed that these proposals are based on a rational judgement by the Council but it has proved very difficult engaging with them. They initially wanted to make their planning decision before the closing date for comments.

Other things have also made it difficult to contribute to the Serpentine Proposals which have just been withdrawn – but for how long? The proposals might be driven by the need for a ‘cash strapped’ Council to gain revenue even at cost to our heritage – it is not clear but if cards are put as openly as possible on the table then the creativity of the community is able to be tapped and a great idea may emerge.