In view of the rapidly developing coronavirus crisis and its possible implications for our staff, volunteers and visitors, Buxton Civic Association board of trustees have decided that the Cavern, Visitor Centre and Cafe should be closed to the public with immediate effect.

This is a temporary closure until the end of March, in the first instance. The decision will be reviewed at that time, but will remain under constant review in the meantime.

This is clearly a dynamic rapidly changing emergency situation which we will have to continue to respond rapidly and flexibly to.

We intend to keep our woods and Buxton Country Park open to the public and we will continue to encourage as many people as possible to use them for exercise and emotional and spiritual refreshment.

The wellbeing of our staff, volunteers and visitors remains our top concern.

We have decided that in the interests of the health and safety of our members, speaker and staff to cancel the talk at the Dome this Thursday.

We hope to rearrange it later this year.

Making Cave Science Accessible to all at Poole's Cavern

This unique project based at Poole's Cavern (Peak District) aims to promote UK cave science by offering an open access cave research facility for the science community. Alongside providing a safe working environment, the cave science centre already has a wide variety of “baseline” climate monitoring, from which high-resolution data is being produced. This data is available to anyone who wishes to use it, promoting the development of high quality science projects backed by years of monitoring data.

​Keep up with the science we are doing by following the Blog page for the latest updates.

Our members talk on Thursday 19th March will be going ahead but at the University of Derby Buxton Campus, The Devonshire Dome in the main lecture theatre.

The title of the talk is "The Geology and Archaeology of the Torrs New Mills " with Peter Webb.

The talk is free and open to members and non members. 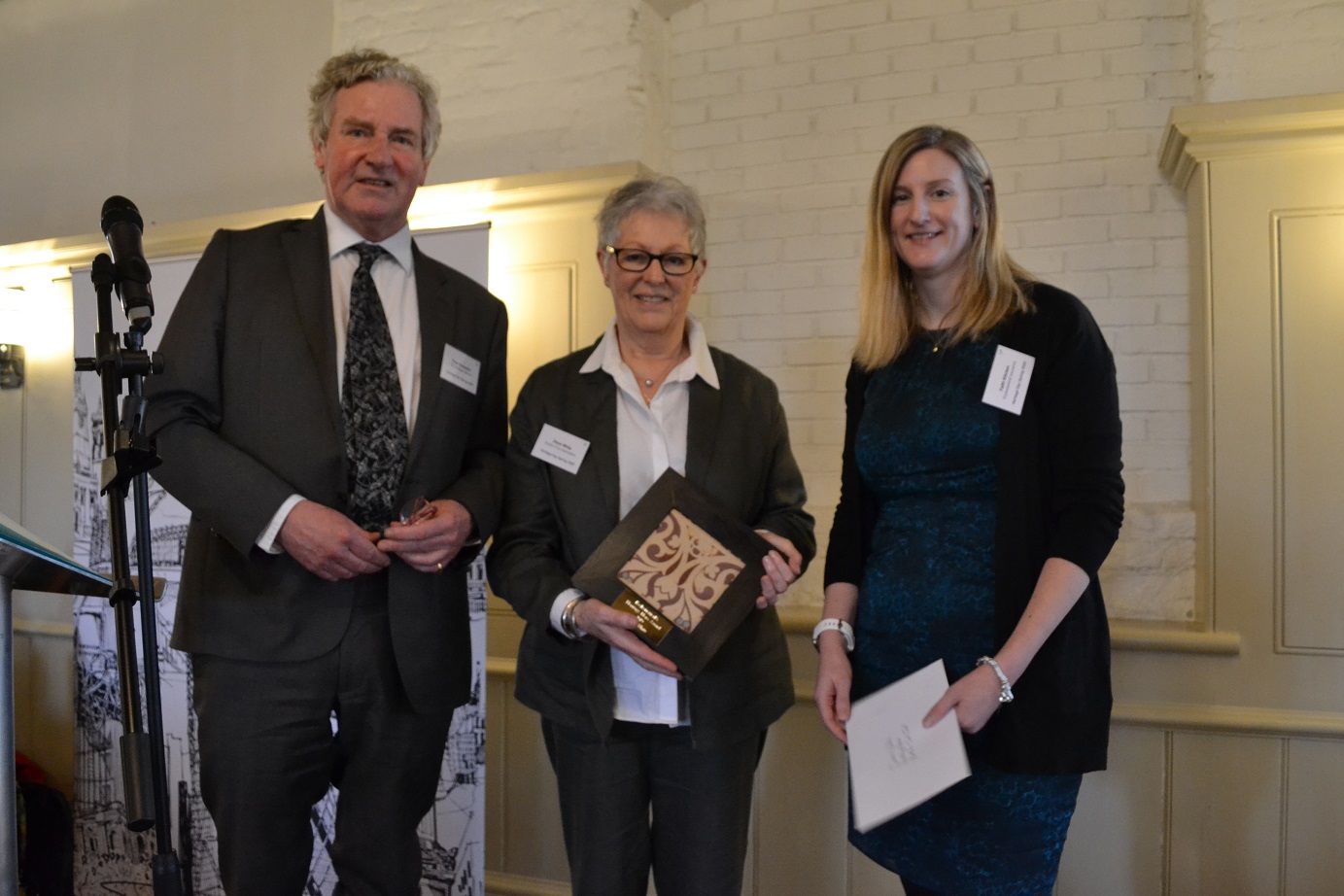 Buxton Civic Association member Diane White has been hailed as one of Britain’s Heritage Heroes for turning derelict land at the heart of the town’s historic quarter into a sensory garden and haven for wildlife.
At a ceremony in the Tower of London on Wednesday, Dia was one of only two people to be honoured by the Heritage Alliance when it marked the tenth anniversary of its Heroes awards which celebrate the outstanding contribution Britain’s heritage volunteers make to society.
The award recognises Diane’s amazing contribution in transforming an area of wasteland into a sensory garden. From designing the garden and leading clearance parties, to fundraising for the project, Diane’s volunteering and fundraising efforts have made a real impact in her local community.
But it was only made possible thanks to her fellow volunteers in the Association’s Spaces and Places Team and builder Dave Trotter.
“I am very proud of what our group has achieved with the creation of a Sensory Garden,” she said. “A year ago, this was a neglected and litter-strewn site in the historic centre of Buxton. Now it is a beautiful and relaxing place where locals and visitors can sit and enjoy themselves.
“The view from the garden is quite striking. This brings benefits, both physical and mental, and I am very pleased to have made a little difference to the community in this way.”
The former nurse and member of Buxton Civic Association came up with the idea for the garden on the site of the former public toilets on Water Street which had been left empty and unloved despite being just yards away from the Opera House, the Pavilion Gardens and The Crescent.
“It’s a place where lots of people come from around the world, and then you get this neglected area, which was once public toilets,” said Diane.
The Civic Association persuaded High Peak Council to lease them the land, which had not been used for nearly two decades, and after getting planning permission and sponsorship from local groups, trusts, foundations and businesses, her plan was put into action.
She timed the opening to coincide with the start of 2019’s landmark 40th anniversary Buxton International Festival, and now the garden is home to birds, bees, butterflies and wildflowers – not to mention grateful office workers who eat lunch on its benches.
“We want people to be able to touch the plants, feel them and smell them,” said Diane, who said that one plant even smells of chocolate.
“One boy said when he touched the thyme it reminded him of his Sunday dinner!”
Sponsored by specialist insurer Ecclesiastical, the UK’s leading insurer of Grade I listed buildings, the Heritage Heroes Award awards ceremony coincided with Heritage Day, the key event in the heritage sector calendar, with speakers including Sir Tim Laurence, Chair of English Heritage, and the Minister for Arts, Heritage and Tourism.
Peter Ainsworth, Chair of the Heritage Alliance and Faith Kitchen, Heritage Director at Ecclesiastical, presented the awards. Each of the winners received a framed original Pugin-designed tile from the Palace of Westminster as a token of gratitude.
Peter added: “A true Heritage Hero is a person who generously gives time and knowledge to creating and preserving beautiful places and objects, often under the radar, for the benefit of everyone. They make a huge contribution to their community by making local places and stories more loved and accessible.”
Faith said: “As the leading insurer of Grade I listed buildings in the UK, we’re passionate about Britain’s heritage. We’re proud to sponsor the Heritage Heroes Awards, and this year celebrates two incredibly deserving winners for their outstanding contribution to the heritage sector.”