Buxton Civic Association are sponsoring a talk at the festival 'Mark Cocker and friends'. The talk is on 6th July at 10.30 am in the Pavilion Arts Centre.

Mark Cocker is one of Britain’s foremost natural history writers whose books include Our Place: Can We Save British Nature Before It’s Too Late? and Claxton: Further Field Notes From A Small Planet. BIF has invited Mark to ‘guest edit’ this event, and he has chosen two authors whose work he admires. Jean McNeil, author of The Ice Diaries and Tessa Boase, author of Mrs Pankhurst’s Purple Feather join Mark for an informal and lively debate about diversity in our countryside, climate change and the writer’s art.

Jon White on a memorable evening 'Trapped' in Poole's Cavern

Not many people know that Chile is the world’s largest miner of copper ore. At the San Jose mine on 5 August 2010, a collapse left 33 miners trapped. They were 700 m underground and 5 Km from the entrance of the mine.

“Trapped” tells the story of how they survived for 69 days until their rescue. The Experiential Theatre Company told this story in a way that does justice to its name!

We were greeted by the team at Poole’s Cavern and required to don boiler suits, gloves and helmets. Health and safety was a priority and we were advised to take responsibility for ourselves and to look out for each other. “What have we signed up for?” one lady was heard to ask her friend……

Into the cavern we boldly go, holding on to a thick rope in single file. On reaching the poached egg chamber, one of our guides unexpectedly fell and screamed to the others, rocks fell clattering and there was darkness. Real darkness and screaming!!!

Slowly the lights on our helmets came back on and we were Trapped. The “miners” panicked as they fought and cried. They calmed, becoming “strong in turns” just as the miners in Chile. There emerged an espirit de corps through which they supported each other demonstrating strength through unity.
We were there and being immersed in the action, were given an authentic experience. The lighting of the cavern, with dramatic images and the haunting voice of the live soloist echoing through, completed the picture.

Then the moment of rescue arrived. For us, it had been an hour while for the miners they were there until 13 October. On our emergence from Poole’s Cavern we all felt a little awed and shaken by this very physical experience. Perhaps also with a little more understanding of the miner’s leader, Luis Urzua, and a sense of how hard it must be to work safely when profit comes ahead of people.

Thanks go to Buxton Civic Association and their team for hosting such a creative, relevant and poignant performance.

Correction to Page 3 of Summer 2018 Newsletter 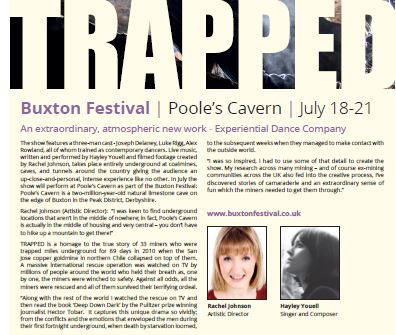 One of the events in the 2018 Buxton Fringe Festival

The article on page 3 about Trapped, the dance piece by the Experiential Dance Company is part of the Buxton Fringe Festival and not as stated the Buxton Festival.

We apologise for any confusion this may have caused.