Including the First Large Skipper sighting of 2015

Hi Everyone,
In meteorological terms, today is the last day of Spring and May 2015 will go down as a cold and wet month generally (similar to 2013) which explains why the transect results have been particularly poor for what is normally a very productive month for butterflies. Surprisingly, the total number of species seen in the month has been 20 with the addition of the Large Skipper during the last 10 days, the first sighting being on the 21st of May 2015 at Williamthorpe NR (Willy Lane).only 4 days later than the earliest date for this butterfly in 2014. This is the first of the summer skippers to emerge and it is somewhat larger than the other 2 golden skippers – namely the Small Skipper and the Essex Skipper. It also has a chequered pattern on both the upperside and underside of the wings which the other 2 skippers do not have. Also the tips of the antennae, although black underneath, have a hooked end. They are also usually seen perched on foliage, rather than grasses, with bramble being a favourite plant. The other 2 skippers are not expected to be on the wing until mid June (for the Small) and early July (for the Essex) so any golden skipper that is seen in the next couple of weeks is likely to be the Large Skipper.
It is pleasing to note that the Dingy Skipper has managed to survive at most of its known areas in the County with recent sightings coming from 21 sites, mainly brownfield, with a maximum count of 15 being noted on the 22ndth of May 2015 at Ashbourne Airfield (Gary Atkins) and 14 being seen on the 27th of May 2015 at Drakelow NR (Tom Cockburn).
Records of another BAP species, namely the Small Heath are mainly being received from brownfield sites in Lowland Derbyshire but the first sighting from the Peak District and Peak Fringe areas have come from Clough Wood (Peter Faulkner), Northwood Hillside, Darley Dale (Christine Gregory) and at Longstone Edge
(Brian & Jean Hallam).
Even the Holly Blue has managed to take advantage of the odd day that proved to be sunny in May 2015 with a reasonable number of recent sightings coming from a total of 15 sites in Lowland Derbyshire but no recent records from the Peak DIstrict or Peak Fringe areas where presumably the wind chill factor and consequently the temperature had an adverse effect on its appearance there.
However, the Brown Argus migrating has only been reported in very low numbers from a few discrete colonies in Lowland Derbyshire including Drakelow NR (Tom Cockburn), Woodside NR, Shipley (Jim Steele) and Stanton Ironworks (Steve Plant & Ian Hunt).
Common Blues are now being more regularly sighted in the County, although the first record from the Peak District is still awaited, with the Blackwell Trail proving to be a ‘hot spot’ for this species with 73 being seen on the transect there on the 23rd of May 2015 (Helen Naylor) and over 100 noted at the same site by Willy Lane on the 30th of May 2015.This site has benefited by both the current owners, Hall Construction, together with the eventual owners,Derbyshire County Council, working together including taking on board advice from both the Derbyshire Wildlife Trust and Butterfly Conservation to produce a really good habitat for wildlife generally and butterflies in particular, so this site is well worth a visit at sometime during the forthcoming summer (whenever that arrives!)
Only a couple of the ‘blue spotted’ Small Copper were seen recently with sightings at Eyes Meadow, Duffield on the 21st of May 2015 (Mick Ball) and at West Hallam Tip on the 30th of May 2015 (Pat & Ken Orpe) and only a few sightings of the normal version of this species coming from only 6 other sites in the County.
No sightings have been received yet from the Peak District for either the Brown Argus or the Dark Green Fritillary, but the Wall Brown has been noted at Clough Wood (Peter Faulkner), Chee Dale (Robert & Margaret Davies) with a maximum count of 12 at Longstone Edge on the 30th of May 2015 (Brian & Jean Hallam).
Fortunately the poor weather of May 2015 has not curtailed the flight period of the Green Hairstreak with recent sightings up to and including the 30th of May 2015 coming from Northwood Hillside, Darley Dale (Christine Gregory), Coombs Dale (John & Aline Roberts), Hall Dale (Nikki Mahadevan), Padley Gorge (Jim Steele & Karl Proctor) and at Longstone Edge ( Brian & Jean Hallam). Similarly the Orange-tip is still being noted in many parts of the County, albeit in low numbers.
It is pleasing to confirm that a handful of fresh Red Admirals have been seen during the last 10 days including sightings at Aston Brickyards (Pat & Ken Orpe), Hatton Meadows (Alex Charles-Roe) and at Rosliston Forestry Centre (Felicity Towns).
Fortunately the small numbers of butterflies seen on transects have been supplemented by some day flying moths including Burnet Companion, Mother Shipton and Latticed Heath (photos of which were attached to Update no 17) and, in the Peak District, the Speckled Yellow, and recently the Cinnabar moth has emerged (photo attached) to add some colour to the general countryside, especially at those sites that contain the much maligned ragwort plant, upon which this moth depends as it is the main foodplant of its caterpillar, the colour of which are bright yellow with black bands which warn predators that they are very distasteful!
Finally, it will probably not be too long before the first sighting of our most common butterfly is made in the County – namely the Meadow Brown followed by the almost equally abundant Ringlet. both of which were flying by the 9th of June in 2014.
Only your records will be able to confirm whether the above mentioned butterflies have emerged yet within the County – thanks again in anticipation of them!
Regards,
Ken Orpe 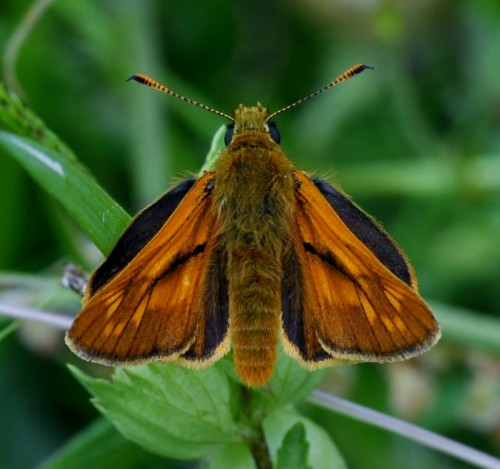 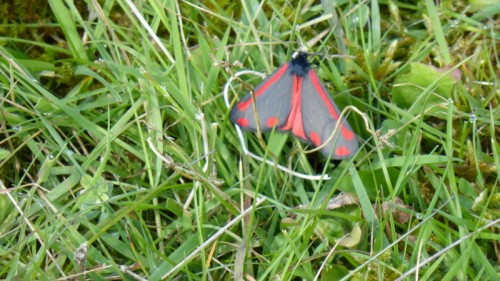