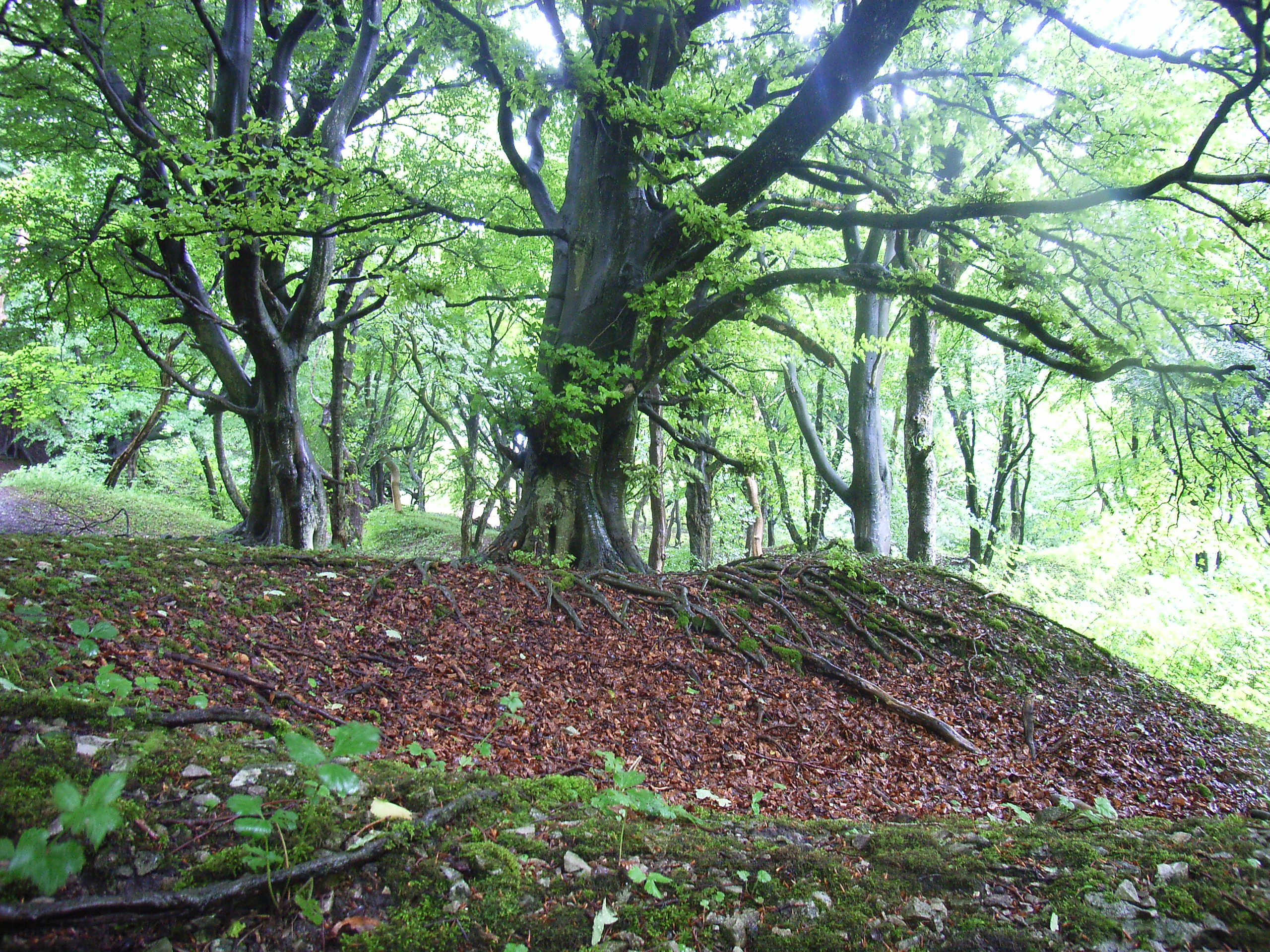 Look at any 19th century print of the Crescent, such as the fine display in No. 6 Café or those frequently shown in the Art Gallery, and you will see a massively enlarged Corbar Hill in the background covered on its western side with trees. Corbar Wood, 54 acres – just over half the area of Grin Low Wood, is our only semi-natural ancient woodland, possessing some of the signs of very old woodland: a magnificent area of bluebells which grow best in woodland and take centuries to spread; a vestigial and possibly mediaeval boundary ditch to protect the valuable coppiced trees; and the remains of a white coal pit, dug to provide super-dried coppice branches which could create the higher temperatures than charcoal which were needed for smelting lead.

In the early Victorian period when Buxton was being developed by the 6th Duke of Devonshire as a spa resort for the increasingly prosperous and numerous middle classes, Corbar Wood was developed as a visitor attraction by laying out broad walks, rustic bridges, seats, shelters, and viewpoints, probably supervised by Sir Joseph Paxton, the Duke’s head gardener, engineer and architect. Nothing remains of the pretty rustic bridges and summer houses, and to get the views you have to walk higher up to Corbar Cross, erected by Buxton Catholics in 1950 to mark the Jubilee Year. Considering the popularity of the ‘Swiss Walks’ and the Victorian fascination with the developing art of photography, remarkably few photographs of the Corbar Walks, bridges and arbours survive among the large collection of historic photographs in the Buxton Art Gallery and Museum.

The layout of the Victorian walks survives but over many decades their surfaces have been badly eroded and there is poor natural drainage as the rock beneath is impermeable gritstone. The annual autumnal leaf litter has built up and after rain and snow creates a potentially hazardous quagmire which walkers naturally avoid and so broaden the paths and extend the slippery areas. Over the last few years BCA has made a determined effort, mainly by Mike Monaghan and Alan Walker, and with valuable advice from Phil Beh-Mycock, to rebuild the surfaces of at least the public rights of way (also on the ‘Ring of Trees’ guided walk), applying to local quarries (Tarmac, Lhoist and Omya) for many tons of aggregate and to High Peak Borough Council for grants to employ a skilled professional path builder, Martin Wragg (Oak Tree Landscapes). After a few seasons the surface of the paths blends in with the woodland floor and has certainly made walking through this beautiful wood a much more agreeable experience. Some repaired paths are now even accessible to wheelchair users and buggies. We are very grateful to all who have made these improvements possible and we hope to repair the very slippery paths around the western perimeter and the top when we can solve the logistic problem of getting about 100 tons of stone up quite a steep hill.