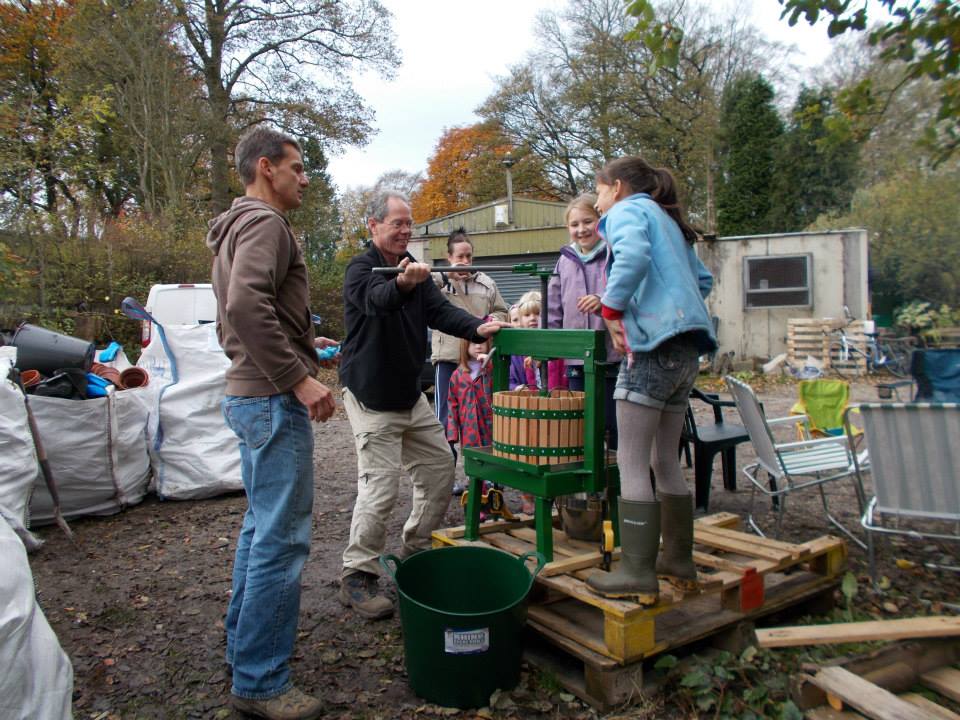 Transition Buxton are coordinating a project to create a community food production and education area based at the old working greenhouses in the Serpentine off Burlington Road. Volunteers have managed to clear a lot of the invasive scrub already and Buxton Civic Association have supported them with a donation.

There is still plenty of work to be done however so if anyone is interested in volunteering, in particular to help with building raised beds, and composting areas, then there are a number of volunteer days through out the winter.

If you are interested in helping out, then check out the Transition Buxton website for more information at www.transitionbuxton.co.uk 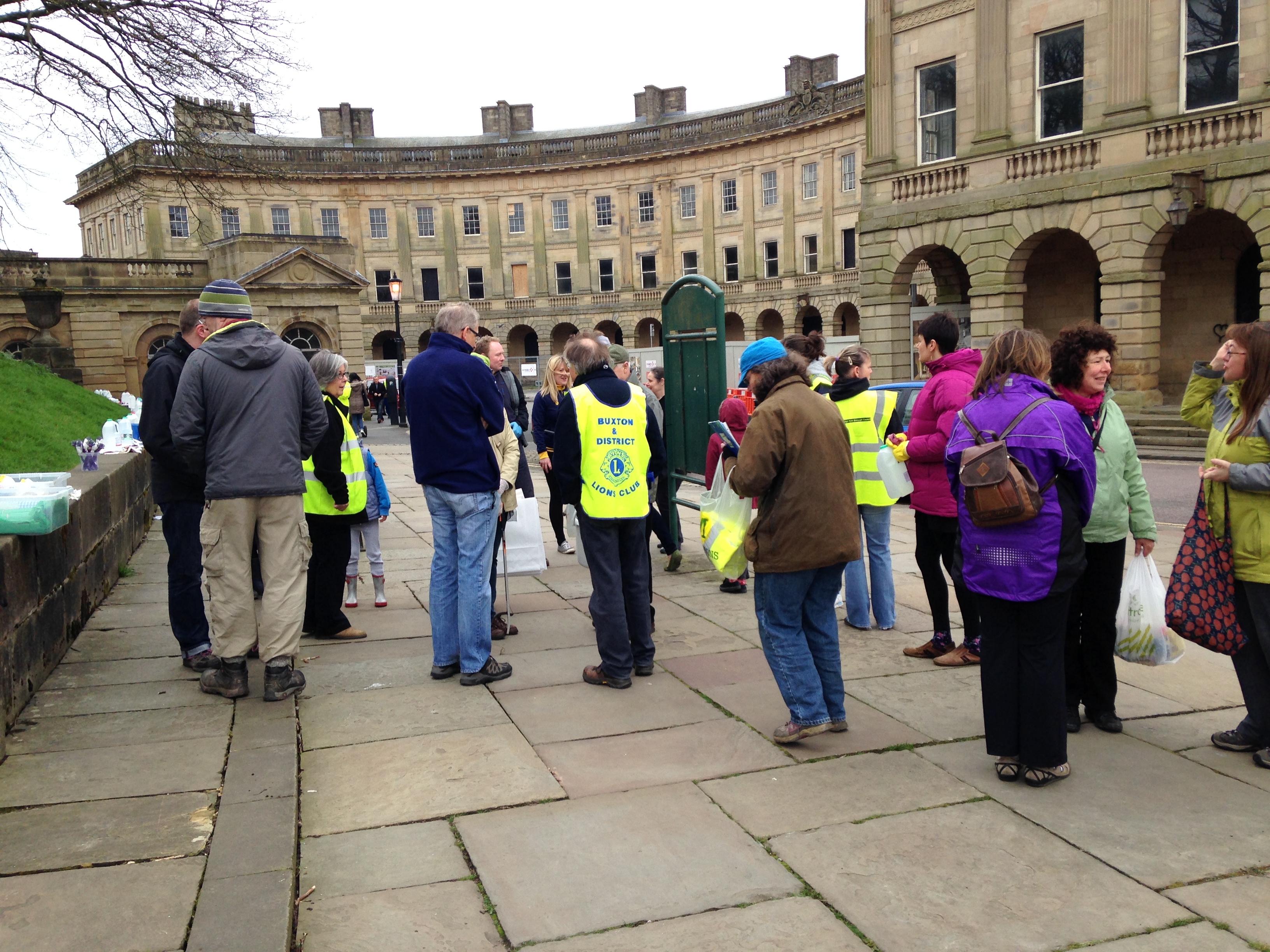 Many thanks to the Buxton Civic Association members for turning out on Saturday morning to support the Big Spring Clean organised so well by the Buxton Town Team. The Spring clean made a big impression on the town and for the town, with visitors and residents stopping to say how impressed they were at the community spirit so evident in Buxton. 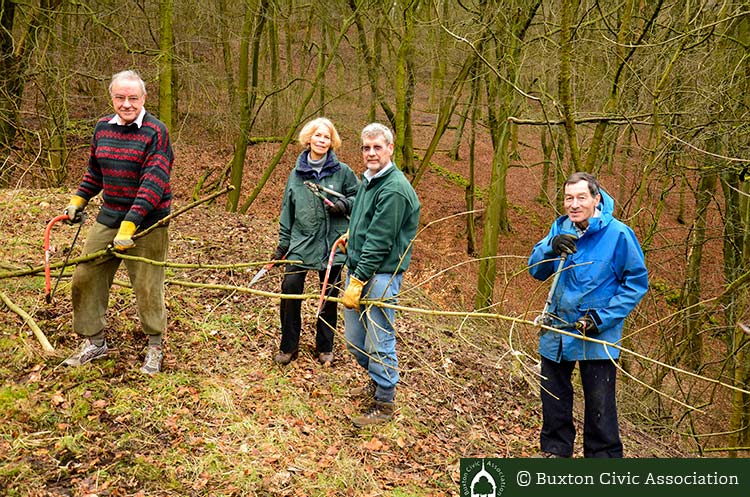 Fancy some good healthy exercise and also helping maintain the Association’s woodlands, then why not volunteer for the Woodland Working Group? The Group meets on the last Monday of the month, or on an alternative Monday if the last Monday is a Bank Holiday, at 9.30 am at Poole’s Cavern.

Most of the Group’s work is carried out in Grin Wood, but on occasions work is also undertaken in one of the other woods maintained by the Association. The work is not over strenuous and does not involve the use of power tools. For example, a typical morning’s work might involve assisting with the clearing of grass cuttings from the glades or the cutting back of saplings on the glade edges. Other work has included clearing paths and drainage channels and making bird boxes. We usually finish by midday.


Tools are provided, but you do need to come suitably dressed and be prepared to get dirty. If you are interested give us a call on 01298 26978 and ask to speak to Alan Walker.

Repair of the main path from Poole's Cavern towards Solomans temple. Repair the infrastructure of the woodlands is a major cost to the Buxton Civic Association. We also undertake repairs to stiles, walls, fences and gates. 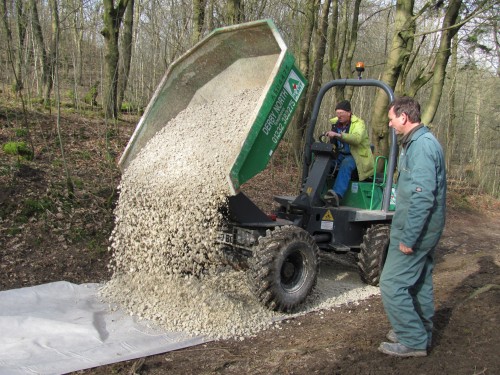 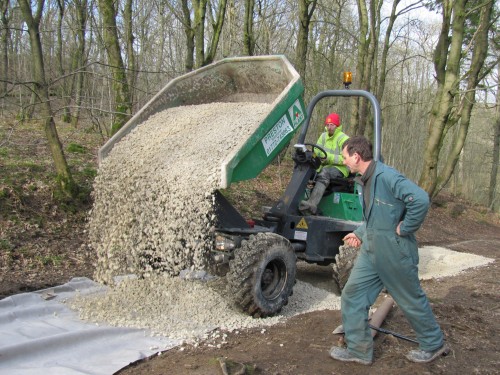 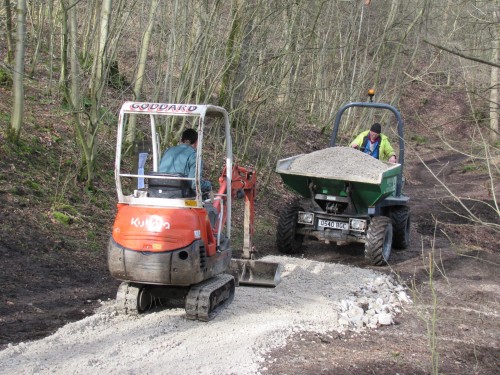 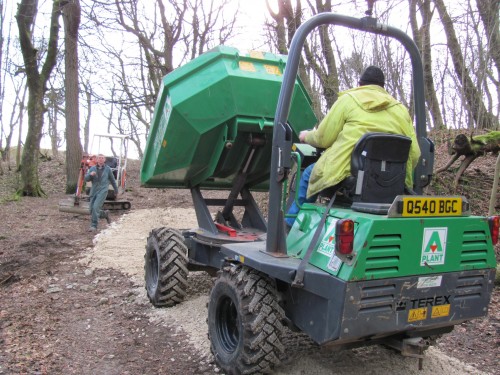 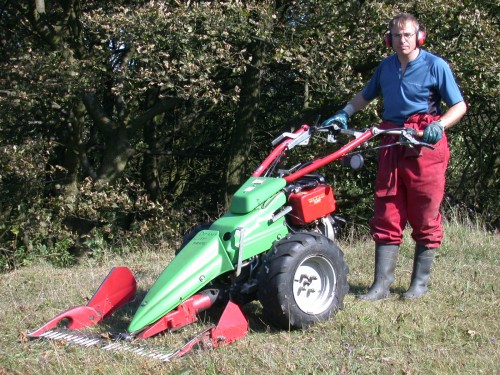 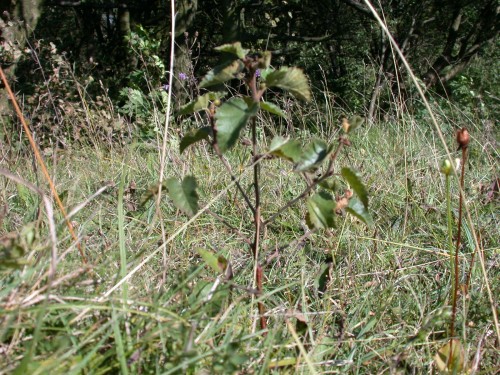 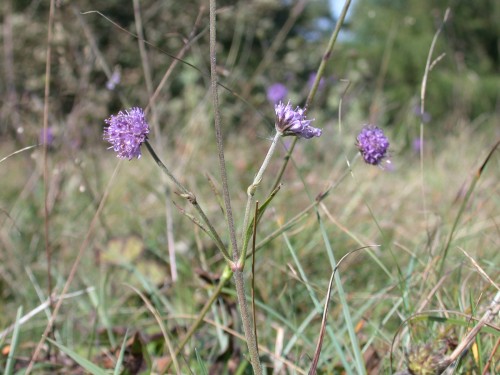 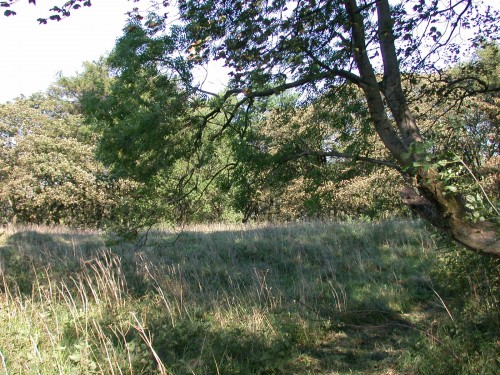 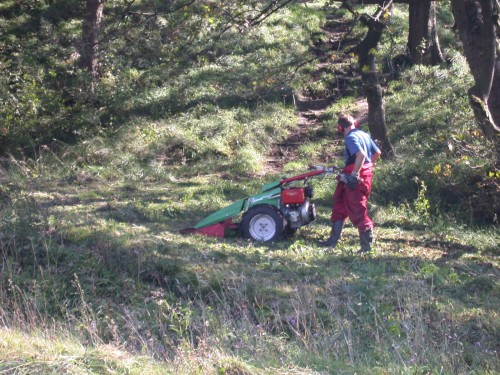 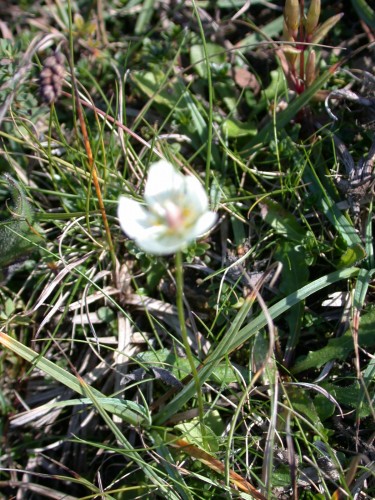 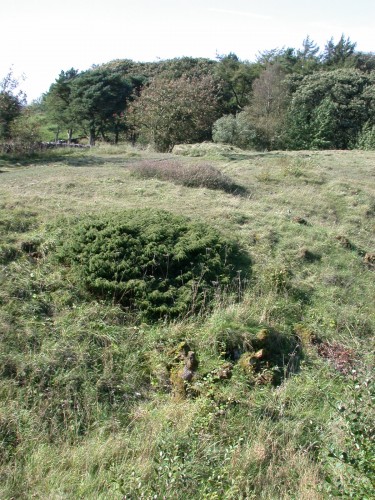 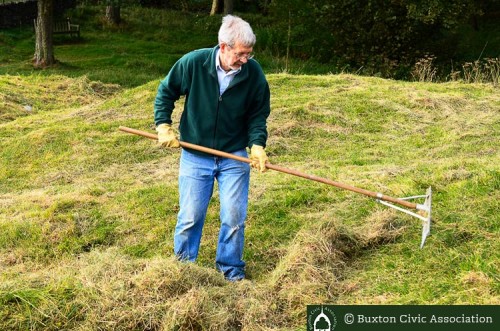 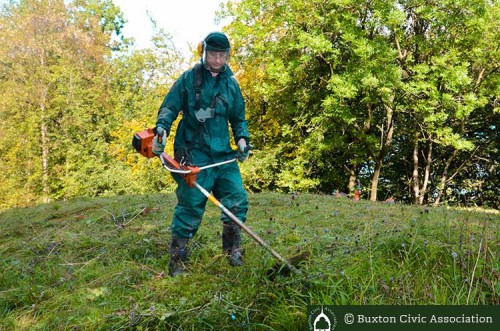 The  botanically  important  glade areas in  Grin  Low woods will receive theire annual autumn cut this month and I am often asked why we do  this  to what  seems a wild area of natural grassland. The  woodland  glade  areas  are  associated  with  the  17th  and  18th  century  lime  burning industry. Waste Limestone ash was tipped  below  each  kiln  and the highly contaminated and alkaline ground wasn't planted with trees.

Slowly the areas were colonised by lime loving species of herbaceous plants and grasses such as Northern Marsh Orchid, Burnet Everlasting, Creeping willow and Juniper. Unlike the neighbouring farmland, this unique habitat wasn’t grazed or fertilized by animal livestock

Recognising the Juniper as the only surviving example in Derbyshire, the area of Grin Low was designated as a site of Special Nature Conservancy Council (now Natural England). It was re­-designated in 1981 under the Wildlife and Countryside Act.

The cuttings are raked and removed from the glade to prevent the thin soil layer from becoming too enriched and able to support invasive species. In this highly labour intensive time our woodland volunteers are invaluable, assisting with grass clearing and cutting back saplings on the glade edges.

We have now brought eight or so glades back to a good condition ­ around seven acres of the 100 acres of Grin Low Wood ­ and 100 acres of Grin Low Wood ­ and hope to enlarge some of these areas further. Funding is currently unavailable for this project, which makes volunteer help even more important. If anyone has a few hours to spare in September and October please contact Alan at Poole’s Cavern Visitor Centre on 01298 26978.

Using the Past to Look Forward

As the 50th anniversary of the Association is fast approaching it’s time to get our archives in order Lindsay Rolland has a Masters in librarianship and has kindly volunteered to attempt to make our archives more ‘user friendly’.
Lindsay says, “I’m trying to get a catalogue of everything in the database that can be searched by place, time or event so people can find the source they’re looking for. And I’m trying to make it as accessible as possible so you don’t need me to work it for you.”